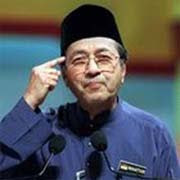 PAS must be getting very desperate in Bagan Pinang such that they got no compunction concorting such a brazen lie, here and making a call for a FALSE jihad, here.

What's got into the mind of these people. That was a seditious and a dangerous call and not an equitable strategy to gain just a few more votes in a mere fu#$ing PRK. Its not like Hadi is going to be the PM or Nik Aziz is going to be the Grand Ayatollah of Malaysia if PAS wins the PRK. So chill you s-holes!

Anwar? Did he really believe he can be PM? Didn't he heard Hadi mocked at the very idea of him being PM? Saying something about "..angan-angan Mat Jenin..". I really think he will be given the lashes if found guilty of sodomy - the evidence against him is airtight going by the grapevines, if those two moolahs got to be PM and Grand Ayatollah of Malaysia. DAP? Well, they will be classified as dhimmis and probably be spared of the lashes unless there are sodomites among them, but some of them will highly likely be stripped of their citizenship and be hounded out of the country.

You folks think PAS is not capable of doing that? They have contorted the verses of the quran out of shape whenever it suits them, so a 'koner baring' U-turn on their Pakatan deal will be no sweat for them, they can do it without batting an eyelid.

After all, they have an array of quranic verses that says they don't need sodomites or a kafir-laknat - that's what they call DAP out of earshot, dhimmis who once said "..Islamic state? Over my dead body.." and have the habit of takebeer instead of takbir, to share ruling with them. Heck! I am not sure if dhimmis are even allowed to rule.

You know folks, PAS got their own justification for their rampant lying and two-timing nature, they called it takiyya. This they got from the Syiah and though they hate the Syiah guts they are a great admirer of their Iranian revolution.

You voters have been warned especially you dhimmis! Now think!