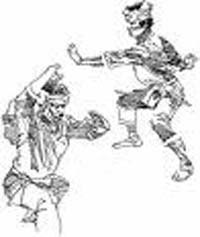 Well folks! BN wins the batang and lost the bukits.
We must remember before Najib's ascension, UMNO was totally demoralized and dangerously disintegrating into oblivion if it continues with its fat-cat ways and the PR was ready to zero-in for the kill. With Najib pushing all the right buttons UMNO came out of the recent GA with somewhat of a renewed hope of being transformed though not entirely, there are still bad-asses in the lower enchelon of the top leadership 'saf'.
Given the scenario UMNO/BN loss is not too bad, they are hanging in there. A PR loss especially in Bukit Gantang on the other hand would spell disaster for them and would have send their loose coalition's momentum completely in the opposite direction.
PR might have won but with Najib's ascension their momentum have hit a bit of a drag. In Najib the PR have met a worthy opponent, 'bertemu buku dengan ruas' as the Malay puts it. The momentum the PR build on TUN flip-flop's UMNO is no more.
It will not be lost on PR that there's a swing of Malay voters to UMNO and on UMNO/BN of the still recaltirant Chinese voters. These are as one ancient mariner blogger puts it loose-ends that needs to be tighten up and from now until the 13th GE battle-royal, come any by-election there will be good battles to be fought.
Moving forward, Najib must bring the battle to the PR. He needs to stay on the course of 'berubah or rebah' transformation he sets, appoint a capable and clean cabinet, keep his fingers on the pulse of the rakyat always, do the necessary and deliver.
Let the battle begins!
Posted by Wah Al-Subangi at 3:27 PM