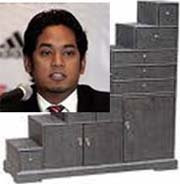 The cabinet was announced! Not exactly same old, same old.. but not exactly WOW! either.
It was not a surprise that KJ was not in the line-up. With Najib shouting his lungs out calling for UMNO to transform from its corrupt fat-cat ways, appointing KJ would be like a premature ejaculation.
But all is not lost, he's young, he got time on his side and he got the parliament and UMNO Youth as platforms to make himself visible. If he is really that good as some people say he is, the fact would not be lost on his skeptics and surely not on the leadership. He can use the time not in the cabinet to rehabilitate his image, his money politics, his spoil brat image. These days the leadership bar has been raised.
In addition, he can reflect on his left leaning idea wrt UMNO that his FIL was disastrously trying to push, and exmine it in proper perspective and with the benefit of hindsight, to get a better handle of the task to be undertaken. It's delicate job and requires a lot of maturity. The half-baked policies of the last 5 years have imaturity stamped all over it.
In time, if the idea is of any good and the conditions are more opportune, and if he is of any good as a leader and properly prepped to be cabinet-ready, who knows what height he is be able to achieve..
We don't want someone to cluelessly announce to the 30, 40 thousands odd Malay class F contractors to go find another job as if he got all the answers and then flip-flop his way out of it, and becomes a habit of his administration. At the end of it left the country and the Malays in ruins.
Anyway.. Congratulations! to those appointed to the cabinet. Your PERFORMANCE are under scrutiny, yes there's DS Najib's KPI but more damning will be the RAKYAT's ie. their votes. So get cracking..
Posted by Wah Al-Subangi at 7:25 AM