Flip-flop is not a bad thing but Pak Lah is.. 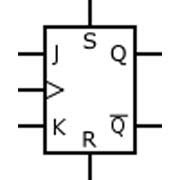 I have never called Pak Lah flip-flop because I am an electrical engineer by training and I know flip-flop is not a bad thing.
Pictured above is a schematic diagram of what people in digital electronics called flip-flop. It is called flip-flop because when a signal is applied to its input it gives at the output a signal that, well.. flip-flop, one microsecond it goes this way and the next microsecond it goes the opposite way and that is useful in the digital scheme of things.
Flip-flop is one of the most fundamental component in digital electronics because it is used to build higher order digital devices such as memories, mouse, keyboards, etc which in turn used to build even higher order digital devices ie. a computer.
That's just the computer, if you consider the whole spectrum of devices that makes today's digital world go round, then you can imagine the importance of these unsung flip-flops working at the lowest strata of the digital hierachy.
Unsung because whoever have heard of flip-flop before Pak Lah comes along, but unfortunately he is giving flip-flop a really bad rap.
While flip-flop is quite indispensible in the digital scheme of things, in our scheme of things Pak Lah flip-flopping antics have been causing a lot of problems, one minute he goes this way and the next minute he goes the opposite way. I think this country can be aptly named Negara Gohed-Gostan like the one mentioned in P Ramlee's 3 Abdul.
I guess his milestone flip-flop was his very first flip-flop, when he flip-flop on his promise - wonder who give him the idea, to TDM who anointed him successor. As a result of that flip-flop we had to endure Pak Lah incompetence which lead the country to its current predicament. After much persuasion Pak Lah agree to leave office, read hounded out of office.
One would think he should be 'bersyukur', for such an incompetent fool he is able to hold the office of the Prime Minister of Malaysia, while people with more illustrious names and who are more able, who during their time have more claim to the position than Pak Lah is now - he was being served the PM job on a platter, had to end their career without ever reaching the pinnacle or still continuing with their career with much dignity in lesser position.
But no.. no siree Bob! Pak Lah is hell bent on not going through the agreed upon succession plan. 14 day before the UMNO GA, with the country economy and politics in topsy-turvy, there is no announcement of any specific date for handover of PM post to Najib, putting the whole country on tenterhooks and then take a load of this! here. Looks like he is going to the brink, saving his biggest and best flip-flop for the finale.
Man..! this guy is dangerous, an incompetent fool holding to levers of power is like a kid holding a hand granade. Try grab a hand grande from a kid who have taken a liking to it.